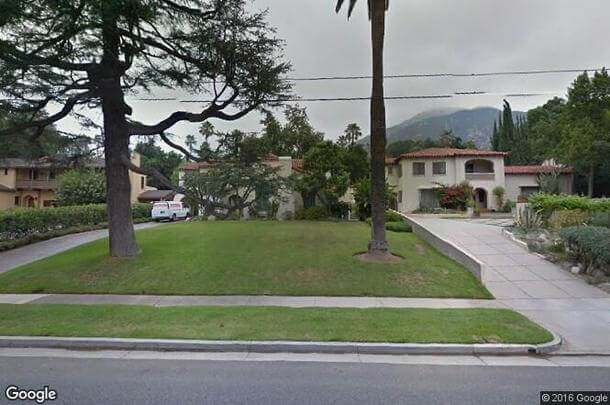 Yes it’s cool, but no, the 90210 house isn’t really in Beverly Hills, California. Or even close to it. Well, at least it’s in the same state. That’s a start, right?

The picture above is a screen shot of the famous Walsh home (Redfin via Google) that served as a popular landmark for televisions viewers worldwide during those oh-so-golden 90210 years.

The house is hidden by a little shrubbery but you should recognize the property regardless. That front lawn was once the site of an awesome impromptu pickup football game with Steve Sanders and Steve Young, one of many stars to make a guest appearance!

Perhaps most surprisingly, the real location of the Beverly Hills 90210 house is actually 1675 E Altadena Dr, Altadena, CA 91001, a far cry from the real Beverly Hills.

And the high school is certainly not West Beverly, but rather Pasadena High School, which as of the time of this writing has a 7 out of 10 rating on GreatSchools.

Not bad, but I’m sure West Beverly would have scored a perfect 10 always and forever.

If you’re a true 90210 fan, you may consider visiting the home at some point if you’re in or around Los Angeles. Just don’t bother the occupants, please.

Altadena is situated northeast of Los Angeles about 20 miles, slightly north of Pasadena.

In case you were wondering what the Walsh house would go for today, the Redfin estimate has it at $1,597,564. It would probably fetch a premium though for being a famous TV house.

For the record, I’ve never been, but I would get a kick out of driving by. Just never remember to when I’m in the area. Shame on me.