I already touched upon the most overvalued cities in the United States, so let’s talk about undervalued areas. Those are the ones we might want to invest in, right?

As one may have guessed, the hard-hit, foreclosure-riddled Las Vegas metro is the most undervalued area in the United States, with a median home price of $129,700.

According to statistics compiled by National City and IHS Global Insight, homes are selling at 41.40% below fair market value, compared to 38% below market value in 2006.

In Las Vegas, a number of homes and condos that were selling for $200,000 are now listed at around $40,000, presenting potential opportunity for those brave enough to take a gamble on Sin City.

Other undervalued spots include hard-hit spots in Florida, along with much of Central California, where foreclosures run rampant; Warren, Michigan also made the top ten, as the economy up there has ground to a halt.

The numbers are determined by comparing median home prices, income, mortgage rates, and population densities, along with historical premiums or discounts exhibited in areas over time.

The big question is determining which one of these undervalued spots can turn it around the fastest, an answer most likely based on employment conditions in the associated city. 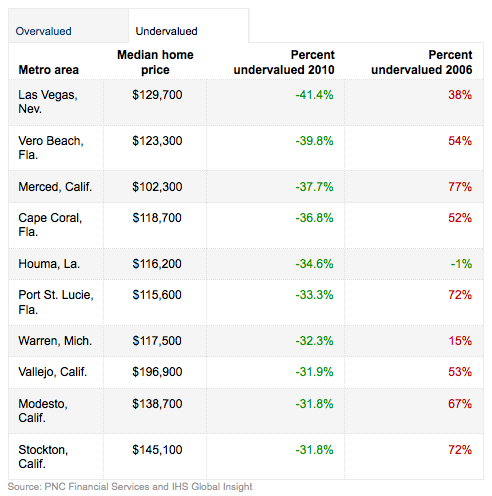