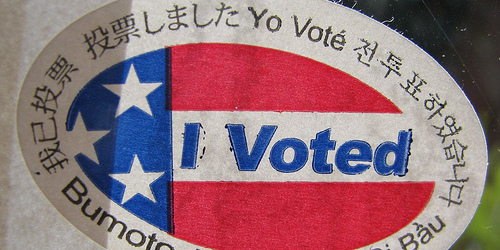 As you might already know (or assume), an election year can make for a choppy economic climate.

After all, Americans have the burden of voting in a new candidate to run the country for the next four years, and with that decision comes potentially sweeping changes.

We could be looking at another Democrat in the White House by way of Hillary Clinton, or perhaps a Republican in the form of businessman Donald Trump.

How Each Presidential Candidate May Affect Home Prices

If frontrunner Hillary Clinton is elected President of the United States, home prices should fair the best.

This isn’t a political thing, it’s simply the opinion of 100 U.S. economists, real estate experts, and other academics, polled by Pulsenomics on behalf of Zillow.

The collective answer was basically that Clinton would be the best candidate in terms of home price health, whereas Trump would be a negative across the board.

Just take a look at the table above. As you can see, the panelists feel Clinton’s nomination would be positive for home value growth. Conversely, a Trump nomination would be perceived as negative regarding that metric, despite him being a big time real estate developer.

The same goes for housing finance reform – positive for Hillary, negative for the Donald.

In terms of overall economic outlook, Hillary doesn’t fare as well, sporting a neutral rating from the panel, but still besting Donald’s negative one.

Funnily enough, it is John Kasich who is perceived best, with positive ratings across the board. Unfortunately, he is no longer in the running, so the point is moot.

To that same end, Ted Cruz received all negatives, but again, is out of the race. The people’s candidate, Bernie Sanders, also received negative marks across the board, despite promises to make everything affordable for everyone. I guess if elected, he could drive home prices lower?

The home value growth metric is based on expectations through 2020. Some 45% of respondents felt a Trump candidacy would “either very negatively or somewhat negatively” affect home prices.

Meanwhile, just 16% felt him winning would boost their expectations “somewhat or very positively.”

Overall, the panelists expect home values to end 2016 up 4% from a year earlier, and rise 3-4% annually over the next few years.

Regardless of who wins, election years themselves are apparently tough on home prices. So we might not see the expected gains play out this year because of all the uncertainty surrounding the election.

Per this analysis from Movoto, home prices tend to perform the worst during an election year, and not as well the year after either.

While no clear reason has been discovered, their take was that election years are “stressful.” That’s kind of what I alluded to earlier in this post. Lots of uncertainty about the direction of the country and the economy. Added stress, whether warranted or not.

That’s not to say it’s a bad year to buy a home, in fact, you could get a better deal. And for sellers, it likely wouldn’t make a material difference. What matters more is probably what the candidate will do in their four years in office.

What I’d like to see is home price performance ranked during all recent presidential administrations to see how they stack up against one another. Like how home prices fared when Bill Clinton was president vs. George Bush Jr. vs. Obama…etc.

Read more: The best day to sell your home.