Realty Q&A: “What’s the best day to list your home?”

Nowadays, money is a little tighter than it used to be. And house values aren’t surging like they once were.

As a result, homeowners need to be a lot more thoughtful when listing their properties for sale.

One way of squeezing out a bit more money, or at least not letting as much slip away, is choosing a good day to list your property. 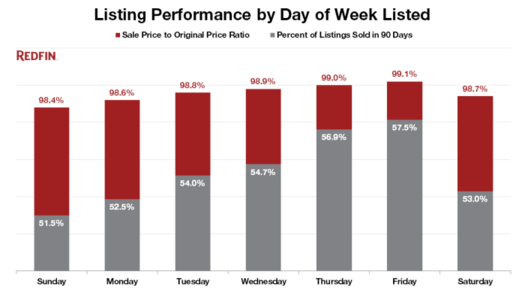 Without further ado, let’s get to the meat of this post. After some research done by real estate powerhouse Redfin, it appears as if Friday is the best day to list a property. Yep. Apparently homes listed on Friday are:

While that doesn’t sound like much, an analysis of over a half million homes revealed that those listed on Friday sold for 99.1% of list, compared to just 98.4% for those listed on Sunday.

For a $400,000 home, we’re talking about $2,800, which outside the world of real estate, certainly means a lot to the majority of individuals out there.

Redfin also noted that most homebuyers tour properties on the weekend, and website traffic for Redfin is 20% higher on weekdays than on the weekend.

So if you list on Friday, there’s a good chance it will land on a potential agent’s/buyer’s radar and get toured within days, not a week.

A shorter listing time can also make your property seem more in demand, and thus drive up the asking price.

Conversely, homes left to fester on the market are often seen as less desirable, and prospective buyers will feel they have more room to negotiate.

You certainly won’t want to reduce the price as that’s another sign of weakness.

Tip: Zillow recommends listing your home as early as possible on Thursday morning, as it will allow more time for agents to find it and add it to their weekend tours.

Okay, so we know what day to list a home. What about the month? Well, Redfin has you covered there as well.

Their analysis revealed that April is the best month to list a home if you want the most bang for your buck.

Homes listed in April fetched 99.2% of their asking price, compared to just 97.3% for those listed in frigid December.

For the record, March, May, and June are pretty solid as well, as spring is the traditional home buying and selling season.

In fact, homes listed in March were more than 70% more likely to sell than properties listed in November.

The sale price to original price ratio drops off a bit in June, and even more in October.

The key is really listing your property before summer begins to ensure you get the largest pool of potential buyers (before they go on vacation or buy another home months earlier).

At the end of the day, timing is just one of many factors that will affect the success of your listing.

Another simple, yet important tactic is to use high-quality images in your listing. Redfin discovered that agents who used DSLR photos on listings priced between $400,000 and $500,000 sold for $5,700 more on average.

Yes, buyers are emotional, and if you appeal to their emotions, you’ll be able to sell for more, even if it doesn’t “make sense.”

Think of all the corporations that use all types of psychological stuff to sell to us on a daily basis. It works, so take note and put in the time and effort to yield the best results.

Read more: Redfin vs. Zillow vs. Trulia: Which is best?