Cul-de-Sac vs. Dead-End Street: From a Real Estate Perspective 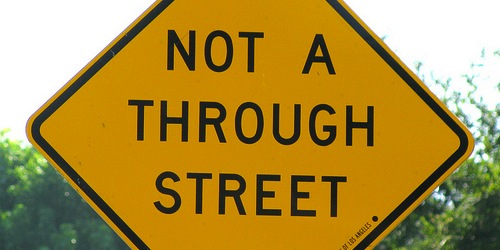 Even if you’ve never shopped for real estate, you’ve undoubtedly heard both the term “cul-de-sac” and “dead end.” And you’ve likely driven on both types of roads.

Often times they are used interchangeably, but they are really two different things, regardless of what your very interested (and biased) real estate agent tells you.

Let’s start by defining “cul-de-sac,” which in French literally means “bottom of the bag.”

This expression can translate to “dead end” as well, since the bottom of the bag is also the end of the bag.

Put another way, a dead-end is a street with no outlet, meaning there’s only one way in and one way out.

The distinction with a cul-de-sac is that it has a circular end, meaning you can turn your car around in one seamless action, instead of having to pull an Austin Powers 40-point turn to get out of there.

Bringing it all together, a cul-de-sac is a dead end street, but not all dead-end streets are cul-de-sacs. Make sense?

Cul-de-Sac Is a Real Estate Plus

If you have been looking for a new house lately, you may have seen the phrase “cul-de-sac” used to highlight a home’s value.

But why? Well, as mentioned, a cul-de-sac is a circular dead-end street, so it’s not a through street.

At first glance, this may sound like a negative. You’re trapped. But wait. That also means everyone and their mother won’t use your street as a shortcut on their daily commute each morning. That’s certainly a relief!

It also means your street will be that much more quiet and peaceful. And your children should have a safer place to play, without having to constantly yell “car,” followed by, “game on!”

So this is essentially why a cul-de-sac can bring value to a home that resides on one.

Dead-End Streets Can Be a Dead End

In other words, the end of the street usually has a wall blocking it off from other areas of the neighborhood, and there’s usually a big yellow sign that tells you it’s the end of the line.

Doesn’t really give you that warm and fuzzy friendly neighborhood vibe, does it?

Aside from this being visually unattractive, it also means there is a lot less surface area on the street. So if you get to the end of a dead-end street, it will be very difficult to turn around.

Parking at the end of the street will also be very tricky, not to mention limited.

So a pure dead-end street can be both an eyesore and a pain in the rear, which could equate to a lower house value.

It’s not the end of the world, but you may feel a little claustrophobic and cramped.

If you don’t believe me, drive down both a cul-de-sac and a dead-end and you’ll see what I’m talking about. You can actually feel the difference.

Read more: Redfin vs. Zillow vs. Trulia: Which is Better?

POSTED IN » Real Estate Vs.