Most folks who live in and around Los Angeles know Santa Monica is a white-hot city in terms of real estate.

Heck, it borders the Pacific Ocean, has incredible weather year-round, and is severely limited in terms of space. And guess what? That ocean acts as a pretty good barrier in terms of constraining supply.

If anything, one could argue that over time Santa Monica will get smaller, thanks to global warming and subsequent rising sea levels.

That supply constraint keeps housing demand strong as can be. Couple that with the fact that there isn’t much new residential building activity, and you’ve got a recipe for sky-high home prices.

While this is perhaps the biggest cliché in the real estate industry, it’s so darn true.

In fact, those three repeated words explain why you can buy a brand new home in the outskirts of Los Angeles with all the bells and whistles for a fraction of the price of a tiny, abused condo in Santa Monica

It’s no mistake – people want to live in Santa Monica. Aside from all the lovely restaurants, bars, parks, and the beach, it’s also close to many of L.A.’s best attractions.

And a ton of residents work in the area as well, making commuting a breeze. Oh, and there are great public schools as well.

In other words, it’s tough to get in.

Where Is Santa Monica, Anyways?

A lot of people probably group Santa Monica with neighboring West Los Angeles, but there are clear boundaries.

The most obvious one is the Pacific Ocean to the west. To the east, the city of Santa Monica stops at Centinela Ave. And north of Montana Ave. it only extends east to 26th St.

The northern border is just north of San Vicente Blvd., and the south border is Dewey St.

By the way, Santa Monica is only 8.3 square miles, so there’s only so much housing inventory, which explains why it will always be highly sought after.

Use the Heat Map 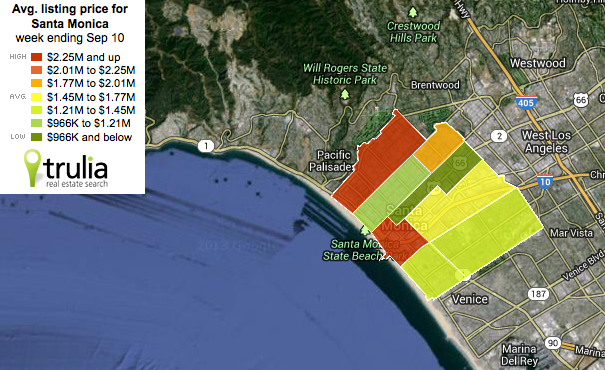 If you want to dig even deeper, you should take a look at Trulia’s Heat Map of Santa Monica, which breaks down each neighborhood within the city.

It segments the sections of the city by popularity, as well as by average listing price, average sales price, median sales price, and price per square foot.

This should give you a great idea as to what you should expect to pay in a certain part of the city.

Tip: Always check the MLS listing to see that the property is indeed located in Santa Monica, and not a neighboring city. Real estate agents sometimes make mistakes.